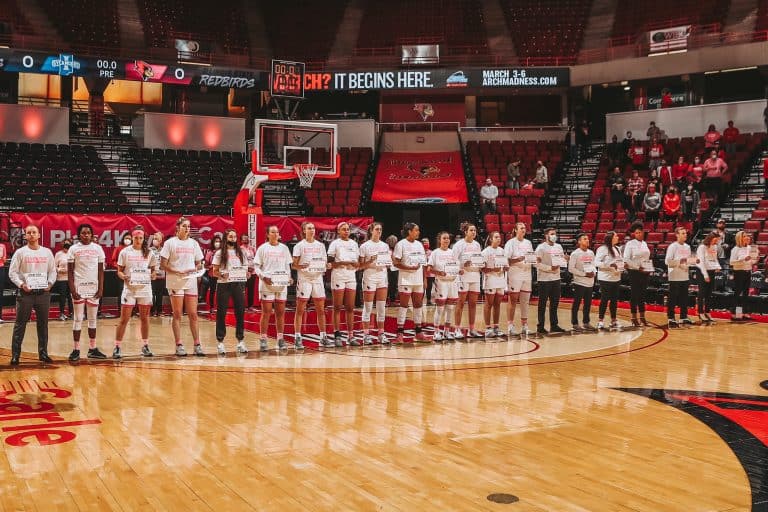 Leanna Bordner is currently the Senior Deputy Director of Athletics/SWA at Illinois State University, but her roots are in women’s basketball. As a young assistant coach, she had known and respected Coach Kay Yow for many years. She watched from afar as Kay Yow managed her teams, her career, and her cancer with grace, courage, and strength.

Fast forward to 2010. Now in administration, Leanna had a chance to bring longtime Kay Yow Associate Head Coach, Stephanie Glance, to Bloomington/Normal as the women’s basketball team’s head coach – but there was one stipulation: Illinois State had to host a Play4Kay game.

Like many public universities, Illinois State had many regulations in place making it difficult to fundraise for an outside entity.

Leanna got to work brainstorming creative ways to engage student groups and campus departments, outside of the restricted space of athletics, to help in the fundraising efforts.

The result? Increased engagement campus-wide that led to significant funding for the Kay Yow Cancer Fund and the fight against ALL cancers affecting women. In addition, local community businesses continue to sponsor the game, as well as hundreds of volunteers who annually solicit financial support.

The money was great, but impact is measured in more ways than money raised.

Illinois State partnered with their local cancer center to honor survivors, providing encouragement to the survivors and their families. They rallied a generous community in support of their team and the cause.

Impact is having a former player who is fighting cancer address the crowd, inspiring other cancer survivors, players, coaches, and fans alike.

Impact is an event that started with honoring a small group of survivors, that has grown year over year, with hundreds of survivors who have been a part of a special blessing.

Impact is Illinois State’s participation in an initiative to raise $100,000 for the Kay Yow Cancer Fund and as a result, the Fund will award a $150,000 grant back to the Bloomington/Normal community to provide access to healthcare for underserved women.

Leanna says people now come to the game to see the “impact.” They see how the community is affected and they want to do more – and that was Coach Yow’s vision: All of us doing our small part so that, as a team, we can do so much more.