This is OUR team…this is why we Play. 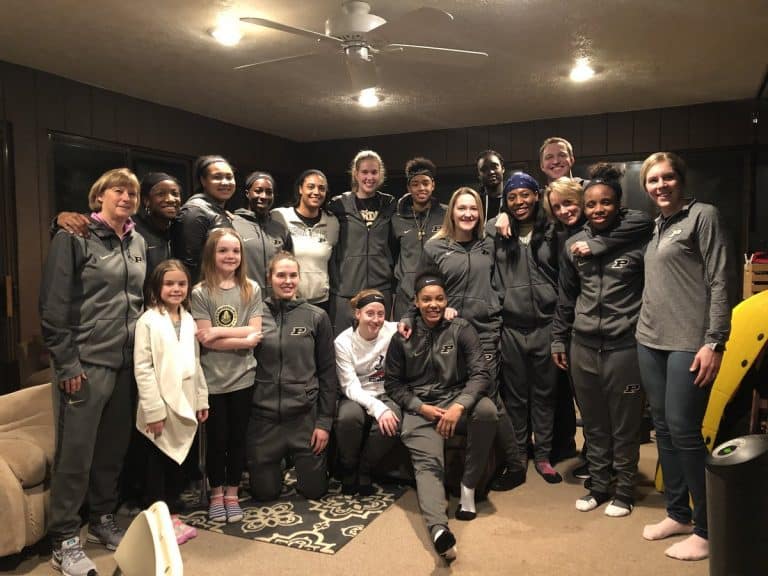 At this point, the list of things that Coach Yow knew is very long. And it grows each day.

Today is day 9 of the 2018 Play4Kay official window. Today’s realization: Coach Yow envisioned Play4Kay as she did because she knew teams would accomplish more than individuals. So true.

More to the point, she knew it would take a team to beat cancer. Even more true.

Sharon Versyp, Beth Courture and Terry Kix are a team. They are three members of the Purdue women’s basketball coaching staff who have battled cancer. So far, their record is 3-0 against cancer.

In March 2009, Beth was diagnosed with breast cancer. At the time, she was head coach at Butler University. She almost canceled her doctor’s appointment because the team had gotten in late the night before. Thankfully, she did not cancel. Her life changed that day and, though they didn’t realize it yet, so did the lives of Terry Kix and Sharon Versyp.

Fast forward. It is the week before Thanksgiving 2012, Terry is diagnosed with stage 3 stomach cancer. She immediately went into fight mode. She saw cancer as the opponent, an opponent with a 90-95% chance of besting her. It was grueling. The odds indicated a Daniel versus Goliath match up. The odds were wrong.

When Sharon was diagnosed with breast cancer in March 2017, Beth and Terry became her teammates in a way that perhaps no other adversity could have crystalized or magnified. They understood what Sharon’s daily journey consisted of and were able to come along side her in the midst of the battle.

On every team, there are different roles. Each important, each has their time, their contribution. In the fight against cancer, we all have a role to play, a piece to contribute.

For the last 9 days, we have been in the official Play4Kay window. It is the ultimate team event. Teams from across the country, working together, to get the biggest win – the win against cancer.

This is the way Coach Yow saw it. All of us teaming up to beat cancer. When we Play4Kay, we play for each other. We play for those who have battled, those who are battling.  We know there are battles still to come – we are playing for those too.

PrevPreviousThe Sound of Hope…
NextOne Woman at a Time…Next