A Story of Hope, a Story of Survival…

As is always the case, fate writes a far better story than any of us ever could.

This is a story of a mother, her daughter, and their coach. It is a story of faith and hope, courage and conviction, suffering and…then joy.

When Hanna Halteman visited the campus of North Carolina State University as a junior in high school, she could never have imagined exactly what it would mean to play for Coach Kay Yow. Her mother, JoEllen, prayed for a woman that would be a mentor to her daughter; a woman that she could trust with the next four years of her daughter’s life; a mother figure that would lead Hanna into adulthood. It seems God answered a lot of prayers through Kay Yow. He answered JoEllen’s prayer through Coach Yow’s mentorship of Hanna.  What JoEllen could never have realized is that Kay would become as much her coach as she would Hanna’s.

Hanna has a uniquely remarkable perspective.  She vividly remembers her last visit with Coach Yow. A visit Hanna calls “Her gift to us.”  In that visit a lot of people said a lot of things. Hanna told Coach Yow that she was grateful for the opportunity that she had given her—that she wanted to honor her. To which Coach Yow said, “I know that, Hanna. I know you will.”

Then the team and travel party left Wake Medical where Coach Yow had been for over three weeks and departed for their game in Miami.

That was January 21. On the morning of January 24, Coach Yow passed away.

A lot of Coach Yow’s lessons seemed so big that day. They got even bigger for Hanna when JoEllen was diagnosed several years later with stage 2 cervical cancer.

Both Hanna and JoEllen had noticed that, throughout her battle, Coach Yow seemed to have a sense of peace. This unmistakable calm was always with Coach Yow.  It was her essence. She never seemed to be without it. JoEllen quickly found herself at peace in her own battle. “I kept my sights on God. Watching Coach Yow, I always wondered how she did it — to weather the storm with grace and beauty and strength. Keeping her eyes set on Christ. Coach Yow embodied her faith in God. I never truly understood it until I went through it. I had an incredible role model in Coach Yow. It was like she became my coach too.”

For Hanna and JoEllen, the annual Play4Kay game at NC State is now more personal than ever. Hanna’s role has gone from that of player, supporting her courageous coach, to daughter, supporting her equally courageous mom—in Hanna’s words, “an extension of myself.”  The “sisterhood” of survivors that annually gather at the Play4Kay game became a shining light through difficult days for JoEllen.

This past February, as Hanna and JoEllen prepared to make their way out onto Kay Yow Court for the annual survivor celebration, a fellow survivor came up, beaming. She was so glad to see the mother-daughter team that had been so encouraging to her the year before, during her darkest days. When the time came, all three went out onto the floor, in celebration, just as Coach Yow envisioned—survivors lifting up survivors, daughters celebrating mothers, women facing cancer with grace, courage, and peace – the essence of Coach Yow. 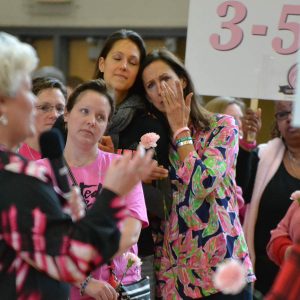 To donate to the Kay Yow Cancer Fund in support of the courageous women in your life, click here.