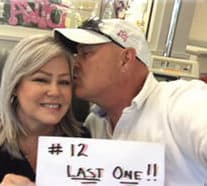 Her voice is strong. It is the sort of strong that comes from a deep trust, a trust that is grounded in faith.

But it is not just her voice that is strong. When she was diagnosed with stage 3 breast cancer in May 2017, Brenda Yates had the myriad of emotions that come with a cancer diagnosis, but she also knew she would beat cancer.

There are very few things on earth worse than cancer, but the loss of a child has to be the very worst that life has to offer. Brenda lost her beautiful daughter several years ago. Having lived through the greatest of losses, she knew her battle with cancer could not possibly inflict worse pain.

In spite of it all, everything about Brenda shines. She remains joyful amid life’s very greatest adversities.  Her joy is a choice, and Brenda chooses it each day.

It is January 2018 and Brenda Yates is still in the trenches with cancer treatments still ahead. The nightmare that started 9 months ago with a breast cancer diagnosis is not over yet, but there is light at the end of the tunnel. Better yet, there is hope throughout the journey.

She started treatment in June. In her situation, many women elect to have a lumpectomy or mastectomy first, followed with rounds of chemotherapy and radiation. However, on the advice of her medical oncologist, Dr. Mark Graham (who was also Coach Yow’s oncologist), Brenda elected to have the chemo first, in hopes of delivering a knockout blow to cancer.

The first round was the hardest. Maybe it was the anxiety that comes with not knowing what to expect, or wondering how much worse things would get before life started to get better, or the shock of coming face to face with the full impact of chemotherapy – all harsh realities of cancer.

Hearing Brenda tell her story, her mentality resembles that of Coach Yow. Around the time of her first treatments, Brenda decided to respond to pain by rejoicing and giving thanks. Immediately, things improved – a burden was lifted. Sometimes the pain of cancer is not treated as much by the medicine as it is by the spirit.

Dr. Graham had advised her to continue living as normally as possible saying, “we don’t live to treat, we treat to live.”  The advice was good, actually it was great. But carrying it out would fall to Brenda. It would be her choice to live and live rejoicing.

She committed to walk each day, something she describes as an effort to “take some control” and do something to build health. Day by day, there was the boost of accomplishment and, even if only for a fleeting time, a moment of control.