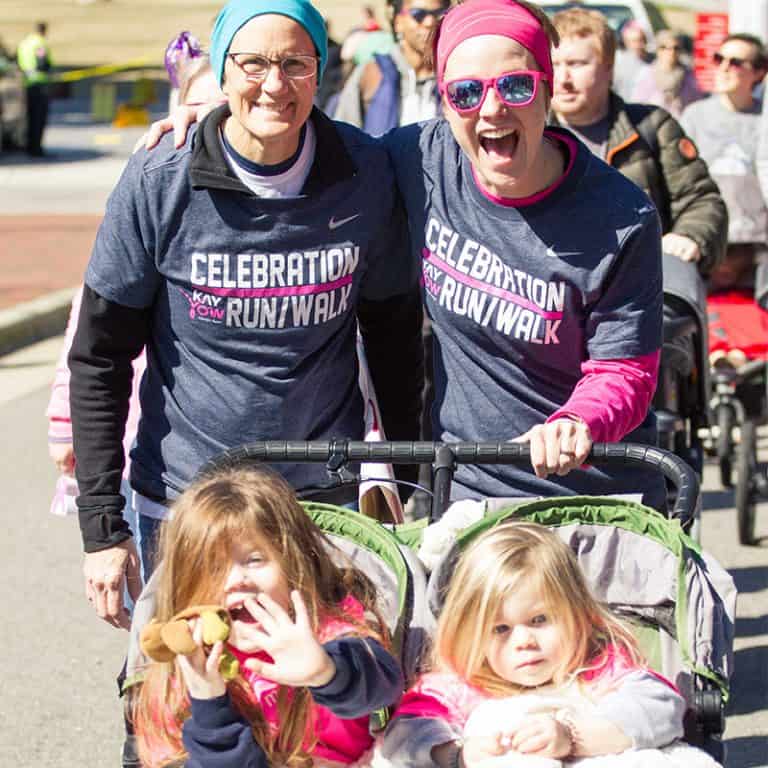 In March 2018, I was diagnosed with an aggressive, stage 3 breast cancer – invasive ductal carcinoma that was HER2+.

I was 34 years old, my kids were 11 months old and 3 years old, my husband and I were supposed to be celebrating our 10-year wedding anniversary in April.

Cancer was the last thing we ever expected.

As a student working in the athletic department at N.C. State from 2002 – 2006 and a post-grad intern for the Wolfpack Club in 2007, I knew about Coach Yow. While I hadn’t followed her journey through breast cancer closely, I knew she had been public about her fight and that inspired me.

Similarly, I chose to share my diagnosis publicly on my social media accounts. 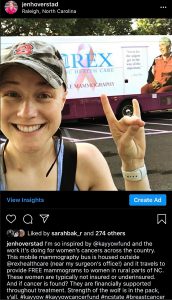 It’s amazing what can happen when you choose to share your own story.

Week by week, month by month, women would send me messages about their own cancer diagnoses – some of them were not breast cancer diagnoses, but I found that we shared so many similar experiences and emotions.

It’s comforting to know you aren’t alone in what can be a very isolating diagnosis.

Other friends would also send me notes of encouragement, including Robin Pate, director of event operations for the Kay Yow Cancer Fund. Rob and I had crossed paths during my time at the Wolfpack Club, and we had loosely kept in touch on social media.

The day before I started chemo, Rob sent a note of encouragement on Facebook. I replied that Carl and I weren’t connected with any organizations and we’d love to learn more about the Fund.

He responded with the following:

“Coach Yow always saw her diagnosis as an opportunity for her to do something for the greater good – I am sure you have that attitude as well. I would love to connect with you and Carl to share more about the Fund and our mission – and see if you see ways to be on our “team”. Will be thinking about you – and your family! Connect when you feel it is the right time for you.”

That last sentence is the one that stuck with me – “Connect when you feel it is the right time for you.”

I thought, “Oh wow, no rush – I thought non-profits were always in a rush?”

A month or so later, Sarah Womack, director of communications for the Fund, reached out to me asking if I was interested in having my name on the upcoming Nike KD11 Aunt Pearl. The shoe is created each year by Kevin Durant to honor the memory of his aunt who passed away from lung cancer. The proceeds from the shoe benefit the Kay Yow Cancer Fund. In 2018, KD had the idea that he wanted the names of female cancer survivors on the shoe, so the Fund was responsible for pulling those names together.

It was an easy yes from me, but I thought to myself “Is this even real?!” (Spoiler: Yes, it was.)

A couple of months later, I had the opportunity to have coffee with Sarah, and, like Rob, she said she wanted to give me a tour of the office whenever our calendars aligned.

I thought “What do they have at their office that everyone wants to give me a tour?”

Finally, in December 2018, I came to the office for a tour, and I quickly realized why they wanted me to see the space. The office is an incredible mix of museum and storybook – telling the story of the life of Coach Yow, complete with framed articles, pictures, autographs, and artifacts.

But, for a cancer warrior, the office is a space of hope and inspiration. It was during that 2018 visit that I learned a majority, if not all, of Coach Yow’s accomplishments occurred after her first breast cancer diagnosis in the 80’s. 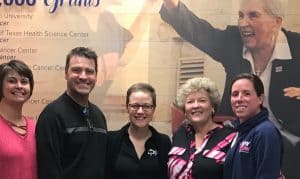 That’s what cancer warriors need to hear – a cancer diagnosis can change a lot of things, but you can go on to do incredible things, things you never dreamed of, after a diagnosis.

At the end of tour, Stephanie Glance, CEO of the Fund, and I sat talking in her office.

I enjoyed our conversation, but I was just waiting for some kind of ask.

She looked at me and said “Jen, before you go, what can we be doing for you right now?”

I knew right then this was a special group, and I wanted to figure out how we could continue working together in the future.

As my treatment plan continued in 2019, I stayed in touch with the Fund. I partnered with a few local friends and fellow cancer warriors who came together to raise more than $50,000 for the 2019 Celebration Run Walk. We volunteered for the North Hills Wine Walk, and we brought more women into the cause.

As 2019 wrapped up, I had my reconstruction surgery, and, after the new year, I went back to work as an attorney for a statewide law firm.

My husband and I thought – 2020 is our year! All treatment and surgeries are done, we can move forward in our lives and our careers with our girls by our side.

And then on January 28, 2020, my mother-in-law was diagnosed with Stage IV cervical cancer.

That’s when I realized that the work of the Fund is needed now, more than ever before – for my mother-in-law, for my daughters, for my friends, and for the women I have yet to meet. 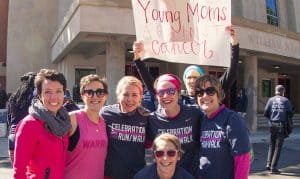 The Fund is a place where both my mother-in-law and I belong, despite our different diagnoses. There is no other organization in the United States that intentionally brings female cancer warriors together and fights on their behalf.

As luck (or divine intervention) would have it, Stephanie reached out in February to run the idea of my role, director of community engagement, by me to see if I would be interested in a career shift.

It was an easy yes.

I’ve realized that my purpose in life is to find a cure for all cancers that affect women. Women are strong, individually and collectively. When we look at the life of Coach Yow, she embraced and made the most of an opportunity that was right in front of her. She didn’t back down, she didn’t give up.

And that’s my hope for myself: from my diagnosis, from this role with the Fund, I will make the most of the opportunity right in front of me. I will support other women with cancer diagnoses, and I will fight for a cure on their behalf.

As we celebrate National Cancer Survivors Day, I’m encouraged by the women in our Kay Yow Cancer Fund Cancer Warrior Network. It’s a growing group that includes women from all over the United States who have a variety of cancer diagnoses and experiences.

If you’re a cancer warrior and not yet part of our team, I hope you’ll join us.

And if you just need to connect one-on-one with a fellow cancer warrior – that’s exactly what I’m here for. Shoot me an email at jen.hoverstad@kayyowfund.com.