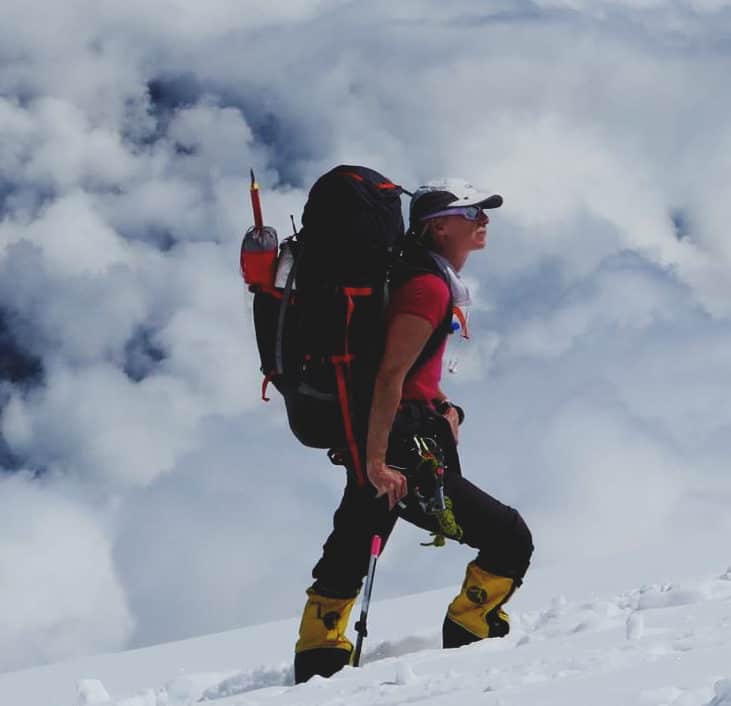 Imagine you are climbing Mt. Everest. You are at an elevation of 25,000 feet. You run out of oxygen. What do you do next?

You take one step forward.

You keep going. It is the only thing to do.

Maybe it is a similar feeling when a person is diagnosed with cancer – terror. Maybe the approach to dealing with cancer is also similar – take the next step. Keep moving forward.

Lisa Thompson has climbed many mountains. Some figurative, some literal. She likens her journey with cancer to the challenge of a climb.

She was 43 years old when she was diagnosed with cancer. Like many women, the diagnosis seemed beyond belief. She thought, surely, the radiologist had the wrong scan. But the scan was hers and the radiologist was correct, it was cancer.

She had a climb set, her first in the Himalayas. While many thought she should, at the very least, delay her plans, Lisa was determined to make the climb. She found an oncologist that supported her goal – this is a critical piece of her story — finding people who understand your goal and will help you achieve it.  Someone who realizes detaching a person from their personal goals could be more dangerous than the cancer itself.

In April she had a bilateral mastectomy. In August she left for Nepal. She didn’t scale the peak in Nepal, not because of her health, but because of climbing conditions. But the experience sharpened her resolve and she set her sights on Mt. Everest.

On March 3, 2016 she had her final round of cancer treatment. 23 days later, she left for Mt. Everest. In every way imaginable it was the journey of a lifetime. It is an amazing story. The sort of story that surely must be a one of a kind. But at that time, Lisa didn’t tell her story, in fact she made sure nobody on her climbing team knew that she had just undergone treatment for cancer. She didn’t want anyone to think she could not pull her weight or contribute as an equal part of a team that would need every link, none of them weak.

At 8 a.m. on May 19, 2016, Lisa Thompson and her team reached the peak of Mt. Everest. That night, at 29,029 feet, from the literal top of the world, Lisa felt the strength and support of every person who had helped her reach the peak.

Elevation of 25,000 feet and out of oxygen or the uphill climb to beat cancer? Lisa has experienced both and is confident cancer, not the mountain, was the tougher opponent. In the face of adversity, she is a reminder that we are stronger than we can imagine. All we have to do is take the next step forward.