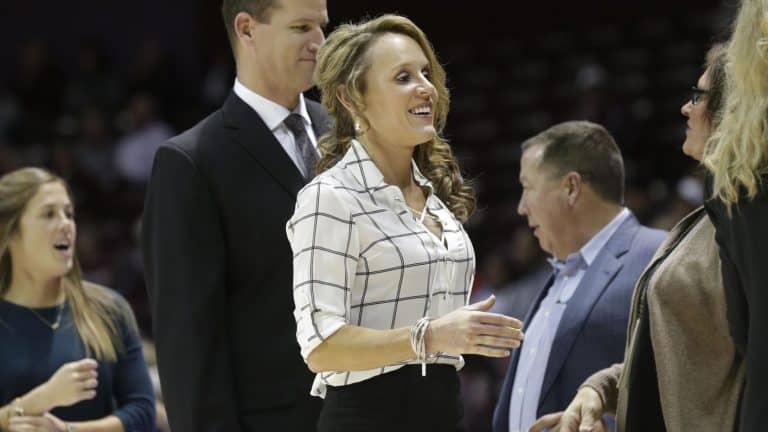 From 2001 to 2017, Jackie Stiles held the distinction of being the all-time leading scorer in Division I Women’s Basketball history. She is heralded for the incredible 3,393 points scored in her hall of fame career. But there are bigger numbers that nobody knows: The number of hours, of shots, of repetitions it took to become one of the most prolific scorers in women’s basketball history.

Basketball is second nature to Jackie. Catching a ball is like breathing, only easier.

So, when she started having trouble catching balls in practice–she is now an assistant coach at Missouri State–she questioned her vision and the possible simple explanations for why her natural rhythm would be off.

Having had Lasik surgery 10 years prior, she thought her lack of coordination around the basketball was, perhaps, due to the Lasik correction’s wearing out.

What happened next, very likely saved her life.

Jackie, like most people on the go, looked at her schedule and saw an opening. One opening. She called on Monday hoping to schedule an appointment for Wednesday. If the doctor could not get her in, perhaps it could wait until after basketball season—she thought.

Perhaps, it could wait for a less busy time.

The doctor had just had a cancellation. She was in for Wednesday. No waiting.

Jackie went in thinking she needed contacts, or perhaps as second round of Lasik. The diagnosis with ocular melanoma was a shock; a shock to Jackie and to her optometrist, who had never seen this particular diagnosis in his 30 years of practice.

Her doctor made calls across the country to the limited number of specialists who deal with ocular melanoma. In the end, it came down to two specialists. One in Philadelphia; the other in St. Louis. The suggested courses of treatment varied significantly.

Her decision to undergo treatment in St. Louis had a lot to do with her healthcare provider and what they would (and would not) cover out of network. Ultimately, she was thankful for the care she received in St. Louis. The treatment was able to salvage partial vision. The treatment recommended in Philadelphia would have left her blind in one eye.

Thankfully, treatments were successful, though not easy. Nothing about cancer is easy. Jackie underwent surgery followed by a period of isolation. Before surgery, she had envisioned herself riding her stationary bike; even going as far as to have her stationary bike brought in so she could continue to workout to pass the time. She had not envisioned being a type of sick she had never experienced. There was no bike riding.

When Jackie returned to practice, eye patch and all, the team, coaches, and Missouri State community could not have been more supportive.

She was young. She was a fighter. She knew she could beat the odds. She had beaten odds all of her life. In the midst of it all, there was an awareness that many are not as fortunate. Many do not have the community, the support system, the ability to fight.

Basketball players are defined by numbers. As a player, it was about the big numbers. Points scored, games won – a career of success.

Now, life is more about the small numbers. The one appointment that was available that fateful Wednesday. The small number of specialists who are trained to treat ocular melanoma with precision. Beating the odds, one woman at a time. In the fight against cancer, this is the power of one.