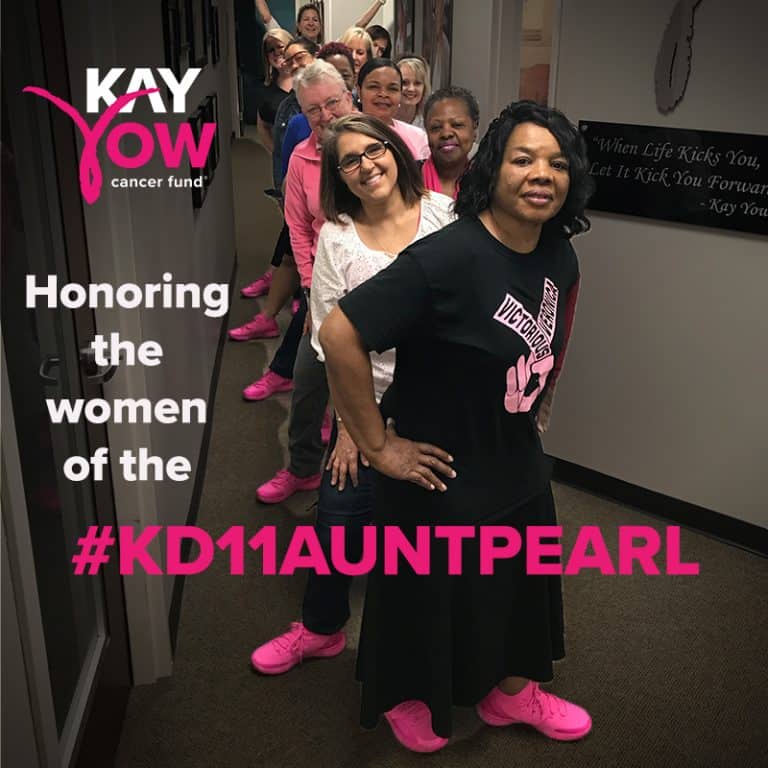 Lynetta Martin is one of 59 women whose name is featured on the KD11 Aunt Pearl. Kevin Durant, in partnership with NIKE, produces a shoe each year to benefit the fight against ALL women’s cancers through the Kay Yow Cancer Fund and to honor his late Aunt Pearl. This year, KD used his platform to share the incredible stories of these women. Here is Lynetta’s story…

The aspect of Lynetta’s story that is so compelling hinges on a deeply rooted fear that is shared by many. When she was diagnosed with stage 2B breast cancer, she became “afraid to stop.”

She imagined herself resting, slowing down just a little bit – just long enough to get through treatment. But this thought triggered fear of being caught by cancer; like a sprinter who lets up just at the end only to be caught at the finish from behind.

Lynetta has two daughters. When she was diagnosed in 2015, they were 12 and 9 years old respectively. They, too, had fears. The day they were told of their mother’s diagnosis, they asked, “are you going to die?”

Their fear was palpable.

It is the deepest fear of any mother—the well-being of her children. How would such a big scare at such a young age impact them? Would they be genetically predisposed to getting cancer themselves? Would their greatest fears about their mother’s health come to fruition?

These were the questions that pushed Lynetta not to stop, not even to slow down.

That is where we are in our collective fight against cancer—we can’t stop. We cannot even slow down. We are in the final stretches of a race that has already gone on too long; it is a race we are winning.

Lynetta went into remission in 2016. It was a year she came through because of her faith, the support of her incredible family, and the love of her extended family—her church and her work families.

From a faith perspective, maybe the concept of pressing on is Biblical. Philippians 3:14 tells us to press on toward the goal for which God has called us. The spirit of determination seems like a Christian value, a core principal.

When facing our own mortality, we go to our instincts. “Don’t stop.” Lynetta went to her faith. Facing a mountain of fears, it was her faith that comforted and even provided the guidance to move forward.

Now we are all moving forward, together. We are heading toward a finish line, beating cancer one final time.