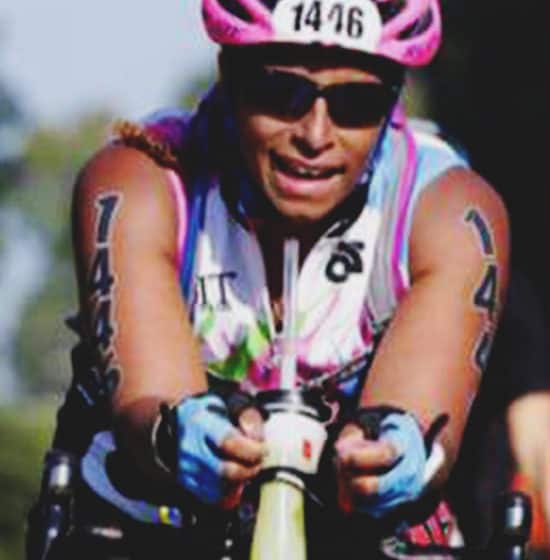 And then there are amazing women, like Dawn Calhoun, with whom Coach Yow would be so very happy to share her platform, her voice. Women like Dawn are the reason the Kay Yow Cancer Fund exists. Their stories let us know we are winning the fight against cancer.

Dawn was first diagnosed in 2004 with stage 1 breast cancer. Eleven years later, her cancer returned, this time as stage 4 metastatic. Her immediate response was not to allow herself to be paralyzed by fear or worry, but to focus on others.

For those who knew Coach Yow, this singular focus sounds very familiar.

Dawn’s mission became simple: Help others find the strength to live through cancer.

Like Coach Yow, Dawn gives hope through her own example. Kay Yow lived 22-years after her initial diagnosis.  The year after she was diagnosed, she led the United States to an Olympic gold-medal at the 1988 Olympics.

In like manner, in 2016, a year after receiving her stage 4 diagnosis, Dawn would complete her “epic” year: a half ironman and two full marathons.

The half ironman is a 1.2 mile swim, 56 mile bike ride, followed by a 13.1 mile run. It is an elite event. Completing it is an achievement; completing it while battling cancer is Herculean.

One of the blessings of the Fund is meeting women like Dawn, who, by their example, put cancer on notice. Their examples inspire equal parts courage and grace, strength and hope. Dawn is redefining life with cancer. Her measuring stick of health is not vital signs or lab reports, but bike rides. How does her strength and energy vary from one ride to the next? The assumption is, as the rides go, so goes the race with cancer.

Is cancer a race?

In many ways, yes.

Dawn is racing cancer, outlasting cancer. The goal is to see the milestones of her daughters’ lives. Graduations, weddings, children.

More broadly, we are in a collective race with cancer. Each advancement in research inches us closer to the finish line, closer to our greatest win. The fight against cancer, like an ironman, has proven to be a long race. Endurance is a factor, perseverance is paramount.

On the most molecular level, science is winning. Even more importantly, it is the spirit of women like Dawn that is truly prevailing in this fight. While we do not know how far away the finish line in the fight against cancer is, we know the outcome. This is the win we have all been waiting for – the final win against cancer.