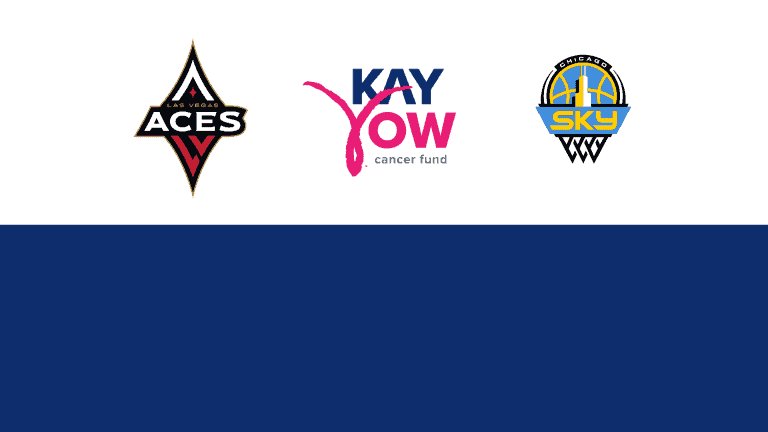 Raleigh, NC – The Kay Yow Cancer Fund is thrilled to have two powerhouse franchises from the WNBA joining our team in the fight against all cancers affecting women. The Las Vegas Aces, member of the Women’s National Basketball Association (WNBA), are hosting a first-ever “PINK OUT THE HOUSE” game in Michelob Ultra Arena at Mandalay Bay on Thursday, August 11 at 7pm (PT) vs the Chicago Sky.

Together, the Aces and Sky are joining forces to raise funds benefitting the Kay Yow Cancer Fund while simultaneously raising awareness around Triple Negative Breast Cancer. TNBC disproportionately affects Black women and accounts for 10-20% of all breast cancer cases (nearly 200,000 cases annually). It is one of the most aggressive types of breast cancer and most commonly found in women under 40. It has the highest risk of recurrence and the lowest breast cancer survival rate. This game is about more than a competition. This game is about stopping the clock against cancer!

Fans have the opportunity to join the Aces and the Sky by participating in their Shooting For a Cure PledgeIt Campaign. By clicking the link below, fans can pledge/donate a dollar amount of their choosing for every 3-point shot made during the game, uniting for something much bigger than wins and losses on the basketball court. (https://pledgeit.org/aces-and-sky-shooting-for-a-cure-tnbc)

“We are so honored that Nikki Fargas, Kay Yow Cancer Fund Board President and Las Vegas Aces President is creatively engaging her team and using their platform to engage the Las Vegas community in the battle against cancer,” said Mandy Murphy, Kay Yow Cancer Fund CEO. “This is yet another step in the direction of continuing to grow our Play4Kay initiative and impact across the women’s basketball community from the collegiate level ongoing to the highest professional level.”

Fans are encouraged to wear pink and fill out “I Play 4” signs in honor of the women in their lives who have battled–or are still battling–cancer. Special moments throughout the game will pay tribute to survivors, families, and friends as a united force in the fight against cancer. To further the pink wave in the stadium, the first 5,000 fans in attendance will receive a pink rally towel to show their support.

“In 2021, a partnership between the WNBPA and the Kay Yow Cancer Fund was created in the fight for health equity of all women affected by cancer. This partnership aligns perfectly with two of our WNBPA pillars; social justice and public health and safety,” said Nikki Fargas, Las Vegas Aces President. “Although both teams will be battling for rebounds, loose balls, and a victory, there are people battling every day for their lives and this is a great opportunity for the Las Vegas Aces and the Chicago Sky to join forces in the battle while raising awareness around Triple Negative Breast Cancer.”