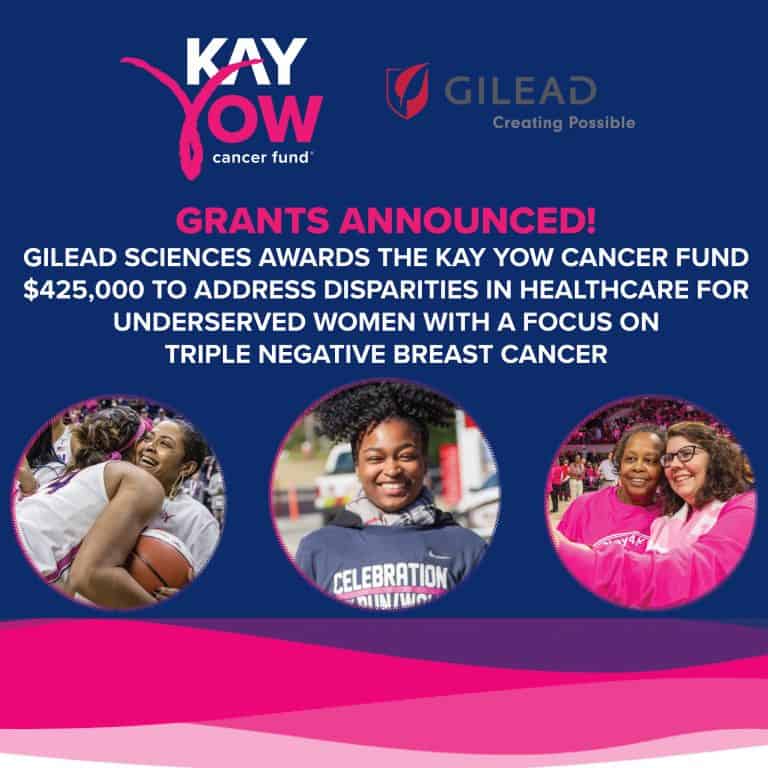 TNBC is a focus area for both Gilead and the Kay Yow Cancer Fund as it accounts for 15% of all breast cancer and has a higher prevalence, risk of recurrence, and mortality rate among Black women. Black women are twice as likely as white women to be diagnosed with TNBC and Black women have a higher rate of breast cancer-specific mortality than white women.

Triple Negative Breast Cancer is considered to be more aggressive and has a poorer prognosis than other types of breast cancer, mainly because there are fewer targeted treatments that treat triple-negative breast cancer.

The Kay Yow Cancer Fund will leverage its relationship with cancer centers, corporate partners, and its national grassroots movement in women’s athletics called Play4Kay to bring attention to Triple Negative Breast Cancer and the social determinants of health for underserved women. Through these grants, the Kay Yow Cancer Fund will amplify the need for greater research around TNBC and the disproportionate affects it has on Black women. The Kay Yow Cancer Fund will also permeate, educate, and empower the family unit, through student-athletes, which will result in a ripple effect, with the goal of improving survival rates and enhancing cancer outcomes throughout underserved communities nationwide.

“We are most appreciative for the opportunity to partner with Gilead Sciences in this life-changing work,” said Stephanie Glance, CEO of the Kay Yow Cancer Fund. “To be able to increase the Kay Yow Cancer Fund’s significant impact by addressing the many disparities around access to quality cancer healthcare for underserved women, while also addressing the disproportionate affect TNBC has on Black women will ultimately save lives.”

Gilead is dedicated to developing innovative medicines for life-threatening diseases, recognizing it takes more than medicine to address the challenges that marginalized people and their communities face. The Kay Yow Cancer Fund partnership is an example of the collaborative work Gilead does worldwide, launching programs that help improve access to care by eliminating barriers and advancing education.

“Gilead is committed to funding programs and organizations that offer much-needed services and support for women affected by metastatic triple-negative breast cancer,” said Brett Pletcher, Executive Vice President, Corporate Affairs and General Counsel, Gilead Sciences. “We are proud to support the Kay Yow Cancer Fund as they have shown a steadfast commitment to improve the health and wellness of underserved women affected by cancer.”

The Kay Yow Cancer Fund was officially founded on December 3, 2007, from the vision of the organization’s namesake, Kay Yow, former NC State University head women’s basketball coach. Coach Yow was first diagnosed with breast cancer in 1987 before succumbing to the disease on January 24, 2009. The Kay Yow Cancer Fund is a 501(c)(3) charitable organization committed to being a part of finding an answer in the fight against ALL cancer affecting women through raising money for scientific research, providing access to quality cancer healthcare for underserved women, and unifying people for a common cause. To date, the Kay Yow Cancer Fund has awarded $7.78 million in the fight against ALL cancers affecting women.  For more information on the Kay Yow Cancer Fund, or to donate, please visit KayYow.com.