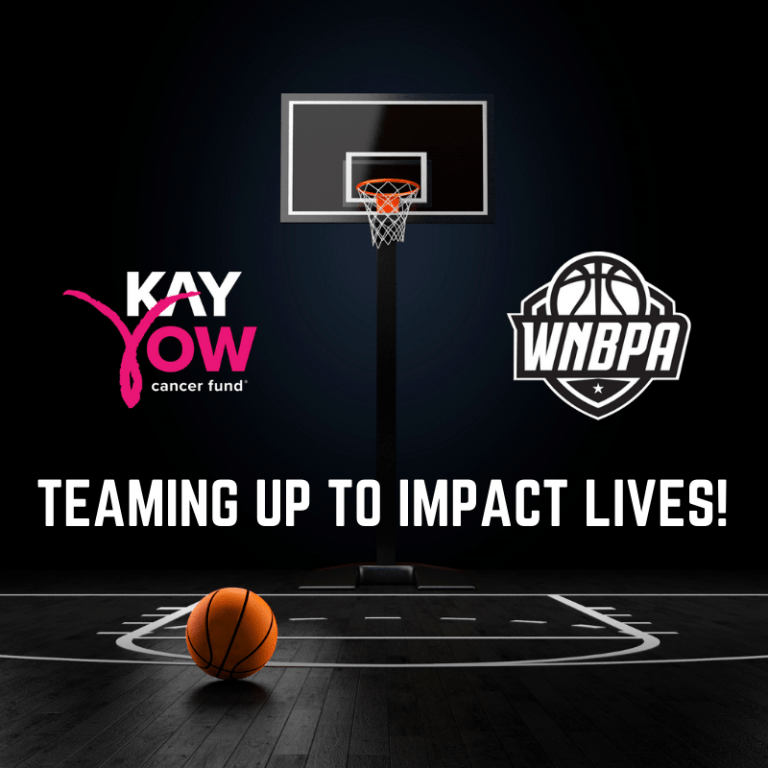 RALEIGH, NC / NEW YORK  – The Kay Yow Cancer Fund (KYCF) is partnering with the Women’s National Basketball Players Association (WNBPA) to drive action to eliminate cancer healthcare disparities for underserved women and to eradicate all cancers affecting women through funding life saving research. Through this partnership, players from across the WNBA will have the opportunity to captain giving campaigns with a focus on areas most authentic to them and their communities.

“[Legendary women’s basketball coach] Kay Yow established the mission of the Fund to ensure that its work would make a difference in the lives of all women facing any type of cancer, ” said Stephanie Glance, CEO of the Fund. “the purpose of the Kay Yow Cancer Fund is to find a cure for cancer and as part of that process, fund research that will result in life saving drugs and medications and to provide quality cancer healthcare for underserved women. We are excited to partner with the WNBPA to impact both of these areas.”

The connection between the Fund and the WNBPA came by way of Jasmine Thomas, point guard for the Connecticut Sun and WNBPA Player Representative.

“I’m passionate about women’s health, because of my mom’s battle with breast cancer,” said Thomas, who has already, individually, raised thousands of dollars toward the Fund’s mission. “I’m excited to see what we can do on a larger scale within the WNBPA.”

One of the core principles of the WNBPA is to engage in community work that advances the social welfare of players during and after their playing careers. Specifically for the 2021 season, the players defined the three pillars of their social advocacy agenda in this way: racial justice and voting rights, LGTBQ+ advocacy, and public health with a focus on women’s mental and physical well-being. The WNBPA’s partnership with the Kay Yow Cancer Fund will further the players’ commitment to spotlight the importance of girls and women practicing self-care.

“We’re a community of women that’s statistically likely to face cancer ourselves — every minute in the US a woman is diagnosed with some type of cancer,” said Thomas. “If we can work to improve those statistics right now — for our families, our friends, our fans — why wouldn’t we?”

Giving campaigns for individual players will be announced in June along with a T-shirt designed by Thomas and BreakingT, a WNBPA-authorized licensee.

ABOUT THE KAY YOW CANCER FUND

The Kay Yow Cancer Fund, a 501(c)(3) charitable organization founded in 2007 by the late N.C. State women’s basketball coach Kay Yow, funds life-saving cancer research and access to healthcare for underserved women. The Fund supports the fight against ALL cancers affecting women. Coach Yow was first diagnosed with breast cancer in 1987 before succumbing to the disease on January 24, 2009.

The Women’s National Basketball Players Association (WNBPA) is the union for current women’s professional basketball players in the WNBA. The WNBPA is the first labor union for professional women athletes. It was created in 1998 to protect the rights of players and assist them in achieving their full potential on and off the court.

The WNBPA handles the negotiation of collective bargaining agreements, filing grievances on their behalf, and counseling players on benefits and post-WNBA career opportunities. The WNBPA also serves as a resource for current players, while they are competing internationally during the offseason.