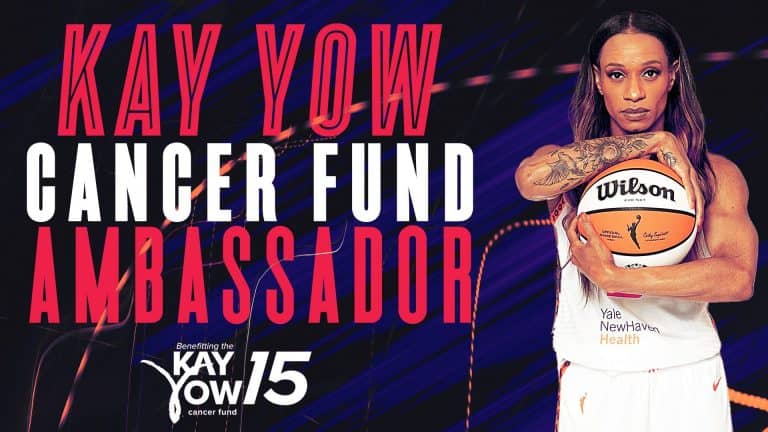 Raleigh, NC (July 18, 2022) – The Kay Yow Cancer Fund is excited to welcome Jasmine Thomas as a National Brand Ambassador. As an ambassador, the Connecticut Sun team captain will promote women’s health equity, unify the sports community to break down barriers to quality cancer healthcare, and educate and empower the next generation to lead both inside and outside their own families and communities.

“Over the past few years, Jas has used her voice to support our efforts in the fight against all cancers affecting women,” said Mandy Murphy, CEO of the Kay Yow Cancer Fund. “With her deep, personal connection to our mission, we could not be more thrilled to formalize our relationship in this role with her as an ambassador.”

To officially kick off this heightened partnership, this past weekend, Jasmine spearheaded several activations in conjunction with the Sun’s Breast Health Awareness game. Activation began with in-game recognition of her ambassador role on Sunday afternoon during the Suns vs. Aces game. To raise money for the Fund, the game was accompanied by an online auction (which remains open) and the evening concluded with a black-tie Sneakerball hosted by Thomas at novelle at Mohegan Sun. Her ambassador announcement will culminate today as she spends time with a younger audience by participating in the Fund’s Empowerment Tour stops at two local universities. Through the tour, a new signature initiative of the Fund, Thomas will be helping to educate, empower, and equip the next generation of changemakers at Quinnipiac and Fairfield Universities to take action that will change the narrative around cancer from the inside out.

“[To] have the platform and ability to help fighters, survivors, and families achieve some semblance of peace of mind through the wonderful work that the Kay Yow Cancer Fund does is truly special to me.” – Jasmine Thomas, Connecticut Sun Captain.

The Empowerment Tour includes a presentation by the Kay Yow Cancer Fund team to women’s basketball stakeholders and other local community members. The Tour provides a way to plug-in with a younger generation, encouraging them to use their platform and influence to have difficult conversations about cancer and to share follow-up resources provided by the Fund. Through the Tour, the Fund’s goal is to reach thousands of people and community members nationwide. If you would like to learn more about the Empowerment Tour and the wave of impact you can create by visiting your school, please contact Jenny Palmateer (jenny.palmateeer@kayyow.com).