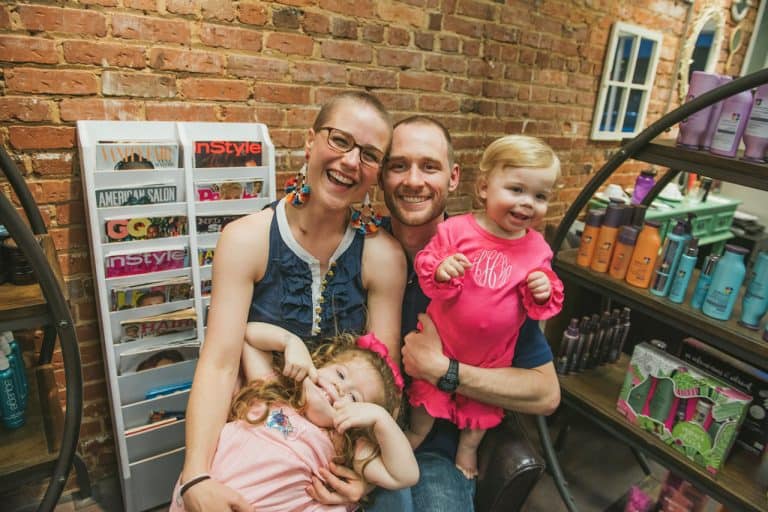 In April 2018, Jen Hoverstad launched a blog called “Jenfluence” – a cute name with significant meaning. Realizing the influence she could have on those around her, it was to be a commentary on life.

Her second post, “Healthy to Cancer in 3 Days,” served as an announcement that her life had changed. Her influence would now have a specific purpose and direction—beating cancer.

Jen has given us [the Kay Yow Cancer Fund] the unique opportunity to tell her story as a woman who is wrapping up treatment for invasive ductal carcinoma. Over the next year, we’ll share Jen’s story from her perspective – in the trenches.

After 13 days of anxiety, on April 6, 2018 at 4:59 p.m., Jen received a stage 3 breast cancer diagnosis. It may sound odd, but it was news that Jen found not only relieving but celebratory. A friend had warned her that waiting for results would be one of the hardest parts of the journey. Add to the worry a suspicious spot on her liver that, had it been cancer, would have pushed her to a stage 4 diagnosis, and suddenly “stage 3 cancer” was welcomed news, perhaps even music to her ears.

For the first time since her world was turned upside down, she knew what she was up against. That information alone made the prospects of facing what was ahead more manageable.

At the time of her diagnosis, Jen was 34 years old. She is a vibrant woman with an amazing support system of family, friends, and faith. It was obvious this is a battle cancer was not prepared to fight.

Funny enough, Jen always envisioned that mid-April 2018 would be a time to celebrate. She and Carl would celebrate their 10thwedding anniversary; her daughter, Halle, would turn one. All of the expected celebrations took place, maybe in slightly different ways than Jen had imagined, but there was one additional celebration. Jen was the guest of honor at a “kicking off chemo” party.

So often when a woman is diagnosed with cancer, her support system is paralyzed in the web of “I want to help, but I don’t know how.” The chemo party gave everyone a “how.” As Jen said, “While there were a lot of unknowns going into [treatment] on April 12, I was calm. I felt supported. I knew I had a tribe of people standing behind me… And with that, I’d say we celebrated our 10thanniversary better than I envisioned.”

Week one of chemo was a learning experience. Learning about the medicines that would make up the “cocktail” of chemotherapy, the infusion process itself, and then detailing the after effects as her energy levels, appetite, and even taste buds changed sometimes, seemingly hour to hour.

As month 1 of this journey came to a close, it is obvious life changed. Yet, the things that are most important in life didn’t change at all for Jen. She is still the amazing mother of two, wife, career woman, friend, and Christian she was on March 24, the last day that the word “cancer” didn’t have quite as much meaning to the Hoverstads.