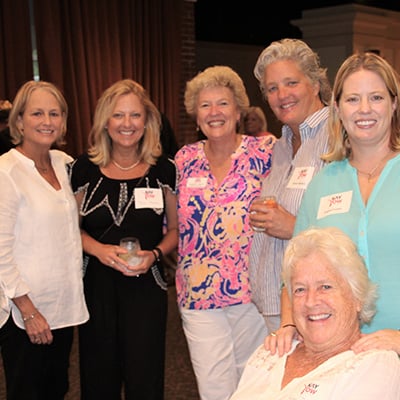 We first met Angela Freeze and Jacque Soptick at the 2010 Kay Yow Cancer Fund Golf Classic at Barton Creek Golf Course in Austin, Texas. They have been faithful supporters of the Kay Yow Cancer Fund ever since. While they never met Coach Yow, her values and principles, along with the mission of the Fund, resonated.

For Angela, the cause is very personal and hits too close to home. Her mother and grandmother both had breast cancer. Angela’s mom, who has been in remission for 18 years, just had a recurrence 2 months ago. With a prevalence of the disease in her family, it was important to Angela to be a part of “finding answers before we get to the problem.”

Angela and Jacque have found ways to impact the fight against ALL women’s cancers. In addition to their participation in the annual golf outing and auction, Jacque also has a birthday party that raises money for the Kay Yow Cancer Fund. Angela, who is a high school coach in Texas, is supportive of the Kay Yow Cancer Fund’s Play4Kay initiative. Obviously, she is supportive of anything that would raise additional funding in the fight against cancer, but she loves the broader impact Play4Kay has on the kids. As she explains, “So much of our kids’ culture now is ‘all about me,’ –it isn’t about you. It is about what you can do for others. Giving can be a foreign concept, but once they get a taste of it, they love it. Through athletics we are giving them an opportunity. The Play4Kay game is the cool thing to do, but then the kids realize what it stands for.”

Angela says they first learned about the Kay Yow Cancer Fund through friends. “We are blessed to have a lot of good friends who are like minded. They love to give as well. They are good people. The cause brings us together.” They loved the Fund’s commitment to support scientific research, particularly grants that would result in clinical trials. With the Fund’s ties to athletics, the Kay Yow Cancer Fund was a natural choice.