Fighting Towards the Finish Line 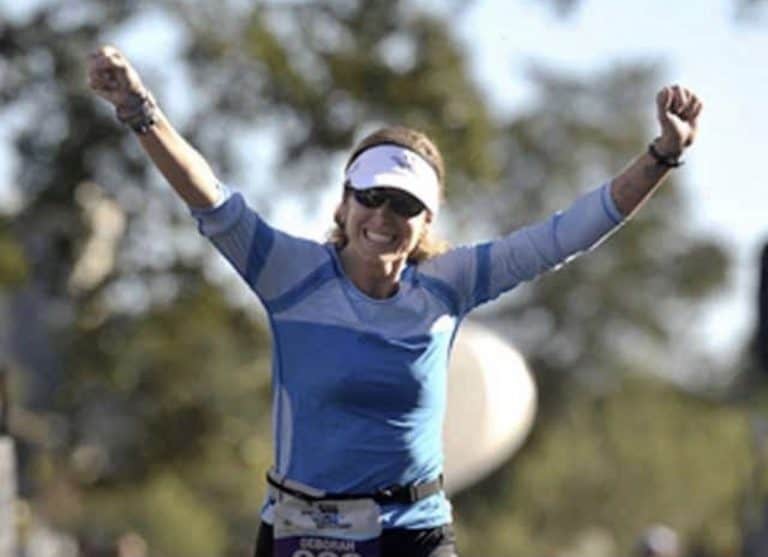 For Debbie Zimmermann, leading a healthy lifestyle was never challenging. She had found a passion for being active and was constantly setting big goals for herself in the world of Iron Mans and marathons. Preparing for these competitive events required taking care of her body, consuming a healthy diet, and overall being in tune with herself and her state of wellness.

Not only does Debbie implement her own methods of achieving wellness, but for twenty-seven years she has also encouraged other women to do the same as a professional in women’s health. Much of her time is spent talking with women about the importance of managing one’s health to put them at a lower risk for life-threatening illnesses. Part of her role as a healthcare professional is to “practice what she preaches,” meaning that she too makes the effort to be proactive and get cancer screenings.

In the Spring of 2021, Debbie got her cancer screening, like always. Afterward, she went home expecting a call, like always, and when the phone rang, she was asked to come in for a follow-up appointment, like always. Except for this time, what she didn’t know was that the results would be different.

As she sat in the waiting room, she so graciously comforted other women who had heard their own life-changing news. After all, she was knowledgeable about many of the circumstances these women were in and knew that at that moment, they needed a hand to hold.

Finally, she was called in to see the doctor, and that’s when the news hit. Debbie had never put herself in a high-risk category, but there she was, receiving the news that she had a rare and aggressive form of breast cancer. While it was discovered fairly early, its rarity presented a wide range of complications. Since getting this news, she chose to undergo an aggressive course of treatment and has also endured a double mastectomy.

The lesson that Debbie learned – “Life isn’t always controllable.” For years, she had adopted an extremely healthy lifestyle herself and made a living by guiding other women to make it their mission as well. She asked herself, “How can I continue to encourage others to practice health if I exemplify that sometimes, it doesn’t work?” While this has been an immensely hard reality to face, Debbie continues to affirm that part of her journey has been about “letting go.”

The months following her diagnosis were some of the most difficult she had experienced in her life. While recovering from treatment, Debbie found herself at home watching the 2021 New York City Marathon on television. In the midst of feeling mentally and physically defeated, she watched others cross the finish line and remembered the overwhelming sensation of strength and accomplishment during her own marathon experiences. That was the moment she decided she was going to gain her life back and be on that same starting line in New York City the next year.

She won’t be lining up alone, however. Debbie’s daughter, Isabel Zimmermann, who is on North Carolina State’s Cross Country and Track team, will be joining her mother’s side. A bittersweet moment, as this will be Isabel’s first marathon, and Debbie’s last. It will be a testimony of their bond, a demonstration of her courage, and a declaration to all women battling cancer that they too are capable of anything.

Debbie embodies the idea that “what can be perceived as a weakness can also be transformed into a strength.” She is a walking image of how no matter what we are going through, we have the power to regain ourselves and our lives.