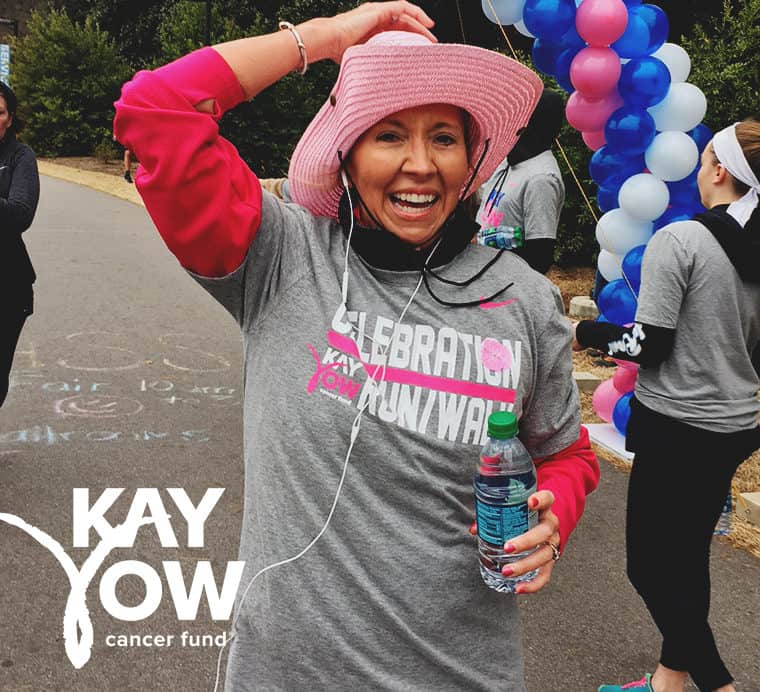 On February 17, 2018, Liz Fenton and her sons participated in the 2nd annual Kay Yow Cancer Fund Celebration Run/Walk. Wearing a pink cowboy hat that was given to all of the survivors in attendance, Liz ran the 4K route, doing her best to keep up with her sons.  Liz crossed the line with her sons by her side. They finished as they started, as a team.

It is a team that Liz is familiar with – a team for which she herself has given much.

At age 41, Liz Fenton faced cancer—for the second time in her life.

Diagnosed with thyroid cancer at age 28, she was now facing early stage triple positive breast cancer. Her mother had passed away three months earlier and her husband was a stem cell donor for his brother, who was also battling cancer. There was no immediate family in town and she was raising three young boys. Liz needed support – she needed a team.

Without orchestration, Liz’s team started to take shape. Women she knew from tennis, neighbors, other young mothers all coming to her side, giving strength for the day and hope for better days to come.

Maybe it was the team concept that led Kay Yow to start a cancer organization. She knew the value of team.  For Coach Yow team was also family.

Where Coach Yow was rich in team, she also realized many women did not have that community of support.

Her vision for the Fund was such that through events like the Celebration Run/Walk and Play4Kay nationwide, a team, a family has been created and is growing. With each event, each passing year, our team gets bigger, our hope gets louder.

As with all teams, there are roles to be played. Liz’s role has changed through the years. She has been the recipient of the gifts of hope and strength and she has also given those gifts to others. It is the consummate team metaphor.

In the years since her second diagnosis, Liz and her team continue to battle cancer.

She participates in an ongoing research study at Duke University. A study that is helping advance our understanding of cancer at a scientific level.

She has been a driving force beyond local Play4Kay events and participates in an annual fundraiser that unites her community in the fight against ALL cancers affecting women.

Looking ahead, we know that there is a big win coming for our team. When that day comes, we will have women like Liz to thank – empowered women that have found the strength to give us hope.