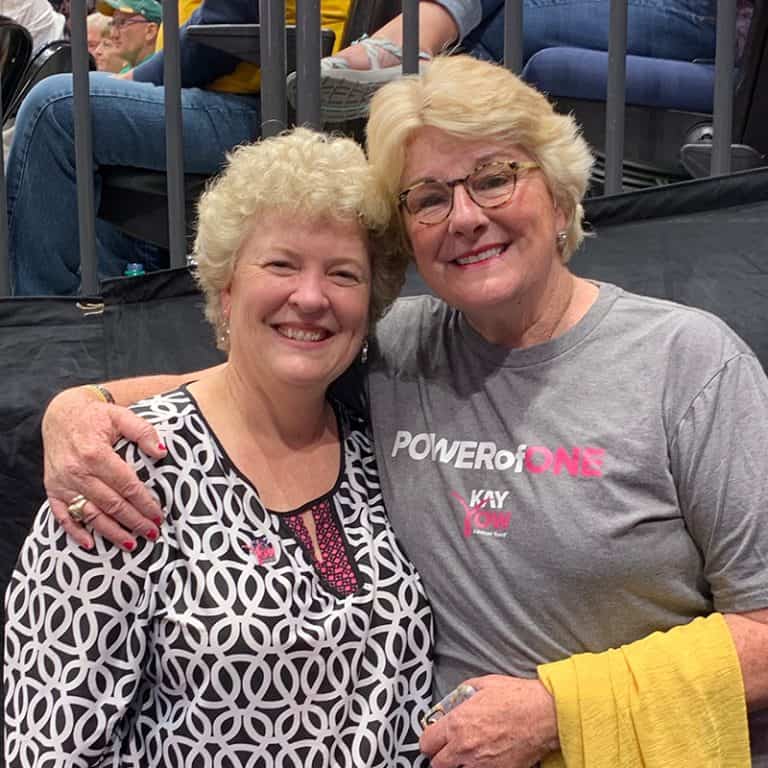 Agnus Berenato sat on the scorer’s table in Reynolds Coliseum on the evening of Kay Yow’s 500th win – waiting for a slice of cake.

She figured she had helped Kay Yow reach the 500-win milestone– both as a student-athlete at the University of North Carolina and as head coach at Georgia Tech – she had unwillingly provided a few of those wins over the years. So, she was looking forward to enjoying the celebration for her colleague. It was a touching moment. An opportunity for humor and an opportunity for two women to share in each other’s success and mutual admiration.

Agnus is a coach. She was a friend of Kay Yow. She is many other things.

She is a mother. A sister. A daughter. A wife. She is also a cancer survivor.

Thankfully, she is a stage 1 breast cancer survivor. She credits her stage 1 diagnosis to the wonder of 3D imaging that is enhancing the quality of a mammogram screening to the point that many early stage cancers that would previously have gone undetected are being caught—in time.

Back to the story…

Agnus has cancer in her family. Her mother, her sister, her brother. When she heard the diagnosis, her thoughts went immediately to her children.

How would she tell them?

Did she have the BRCA gene? If so, that would mean her children, 3 daughters and 2 sons, would have a 50% chance of having the gene themselves. It was her biggest fear. Nothing else mattered.

One by one, she found the best setting to tell each of her children. It was important that her kids, many of whom were out of state, be in a place of support when they heard the news.

She was tested for the BRCA gene—awaiting the results was excruciating. Finally, good news. She was negative for BRCA. She sobbed with joy– it was her biggest breakdown and greatest relief.

She had surgery to remove the lump and then began radiation. Being a college basketball coach, January to March provides a challenging schedule under normal circumstances. Add in daily radiation treatments and you have a logistical nightmare. Often times she would fly out to a game and return in the same day. She only missed two games in that timeframe. It was a testament to her strength and the support of the people around her.

Back to that 500th win and the anticipated slice of cake.

Agnus and Kay Yow are now on the same team. The team that will beat cancer.

Eventually, Kay Yow notched 737 wins – at the time of her passing, she was the 5th winningest active coach in collegiate women’s basketball.

But there is one more win out there. The next win will be one Agnus Berenato will be more than happy to help Kay Yow get – this is the win against cancer – and we are all looking forward to that celebration.