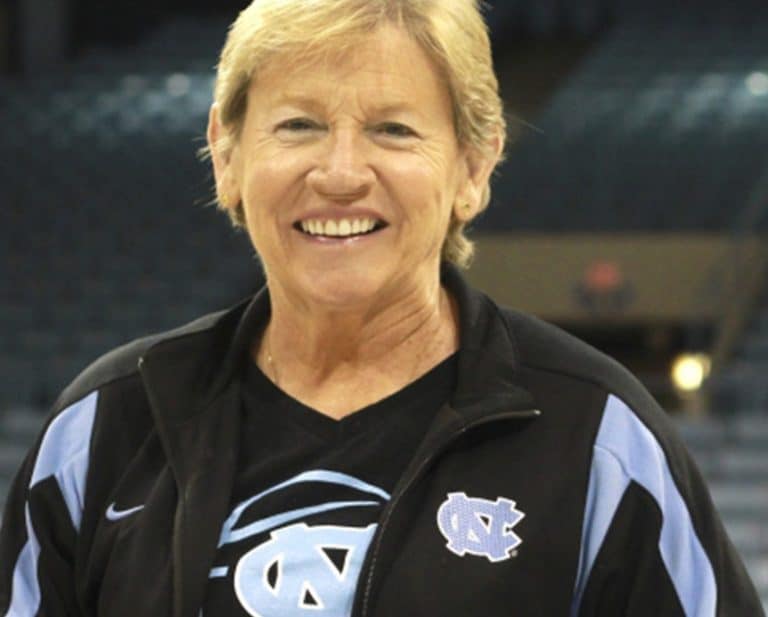 Disclaimer: The first paragraph of this blog is written somewhat tongue-in-cheek. But only somewhat. You will understand.

For those who may not be familiar with the seriousness of collegiate rivalries, to say that the greater Raleigh-Durham-Chapel Hill area of North Carolina is “war-torn” is to put it somewhat mildly. Weddings are planned with football schedules in mind. College students camp for weeks in the winter for a chance to see their favorite team do battle with their fiercest rival. Things are serious. Very serious.

And yet, amid such seriousness, there are things that seem to transcend the divide. One of them is friendship. Another is cancer.

Sylvia Hatchell and Kay Yow were united by both.

On October 11, 2013, UNC Women’s Basketball Head Coach, Sylvia Hatchell, was diagnosed with acute myeloid leukemia. In the days and months ahead, her thoughts often went to her friend and former rival, the late NC State Women’s Basketball Coach, Kay Yow. Coach Yow had passed away 4 years earlier after a 22-year journey with breast cancer.

Not by chance, but by grace, both women were accustomed to beating the odds. They were both a part of making women’s basketball what it is today – a far cry from the days when they drove their teams in vans and made peanut butter sandwiches for their players in lieu of a pre-game meal.

For Sylvia, beating the odds would now mean beating a type of cancer that has less than a 30% survival rate over five years. For Coach Yow, beating the odds meant keeping cancer at bay long enough to be a part of elevating women’s basketball over the course another two decades, starting the Kay Yow Cancer Fund, and giving hope to others.

Both women beat the odds. Coach Hatchell likes to say “you don’t know how strong you can be until strong is all you have.”  Sounds like something to which Coach Yow would have given an approving nod.

When cancer knocks, it seems the things that divide us, usually silly things, like rivalries, fade away. All that remains is a mutual support and admiration of courage in the face of great adversity.  The desire to see a friend through, to give hope.

Sylvia Hatchell is now four years removed from the moment she felt what she describes as “tremendous fear” – the moment she learned of her diagnosis. In Coach Hatchell’s mind, cancer is behind her. Another win in her column. She now looks for ways to help other women get wins of their own.

She tries to help women along the winding road of their own journeys. She visits UNC Lineberger Comprehensive Cancer Center — a 2014 recipient of a $1 million research grant from the Kay Yow Cancer Fund — where she herself received great care. She visits women undergoing treatment at Lineberger to encourage and support them in any way she can, in every way she can.

Giving to others is a big motivator for Coach Hatchell and is one of the reasons she is so passionate about supporting the work of the Kay Yow Cancer Fund. She knows, as did her dear friend, Kay Yow, that through the Kay Yow Cancer Fund coaches, players, fans, and communities can rally together to help others win. It is, as she says, “a win-win.” Unlike all of those NC State vs. UNC games, everyone wins. There are no rivals, only people wearing the same jersey, giving everything they have for their team to win all the little wins along the way and hopefully, one day, the biggest win of all – the win against cancer.