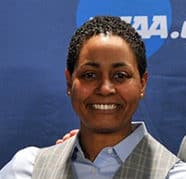 We know that life changes and “normal” is lost when the word “cancer” is introduced. Afterall, hearing about cancer and knowing cancer personally are two totally different matters.

Maybe one of the worst parts about knowing cancer is not knowing when things will become normal again.

Danielle O’Banion is a coach. She is also a cancer survivor.  She is thankful to be a survivor, very thankful– she realizes this is a team she is very blessed to be a part of.

For Danielle, “normal” is day after day of helping young women be the best they can be. Normal is airports and hotels, rental cars and layovers, a quick stop at Starbucks before spending a day in a gym, looking for the next top recruit.  Normal is practice plans and game film. Normal is walking into a gym and competing.

But cancer was a new and unknown opponent—not normal.

Danielle had been dealing with a series of women’s health issues which led her OB-GYN to recommend at least a partial hysterectomy – but it was October – basketball season was starting, and the demands of college basketball would not align with major surgery.

A few restless nights later, perhaps divine providence, Danielle reconsidered. She gave the OB-GYN a 4-day window in which she could be available for surgery, thinking that perhaps, scheduling would preclude her from having the surgery until after the season—unless it was meant to be.  If the schedule did not work, surgery would have to wait. Miraculously, the surgeon was available.

When her labs came back, it was clear things were not normal. Further testing revealed Danielle had stage 2 non-Hodgkin’s lymphoma.

Normal. When would she see normal again? Would normal ever be the same?

As the cancer treatment to save her life and basketball season which was her life intertwined, it became apparent that there would be, at least that season, a new normal.

Back injections on one day, flying to the next game the following day. Six rounds of chemotherapy and conference play. An outpouring of support from a nation of coaches. Well wishers cheering her on at every gym on the schedule. This was the new normal.

Ultimately, normal is a luxury most of us take for granted. The opportunity to readily “get back to normal” is something we don’t realize we should cherish.

Danielle is now cancer free and basketball season is here once again. Her days are likely as close to normal as they have been since she was diagnosed in 2014.  As a coach, each win is celebrated. This win must be the biggest. Beating cancer and getting back to normal.  It is the win all of us are going for – the ultimate win.