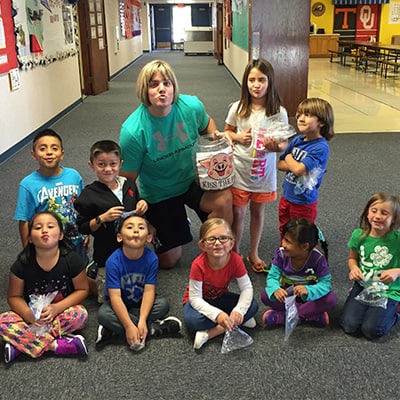 When you hear of a child donating six cents to the fight against ALL women’s cancers, it cuts deep. Immediately you ask yourself, “Am I doing all I can do?” In February of 2017, a child at Akin Elementary in West Texas donated $.06 to the Kay Yow Cancer Fund as a part of her school’s Play4Kay fundraising effort. It was more than enough—it was all she could do.

Play4Kay events were the vision of Naismith Hall of Fame coach, Kay Yow. It was her vision, but it was never about her. It was always about uniting coaches, players, and fans across the country in the fight against ALL women’s cancers—using their game to raise funding for cancer research.

Uniting is a word that we use often and, too often, we don’t consider the intended meaning. Coach Yow meant for people to come together in the fight, yes. But when Coach Yow used the word “unite” she also meant it in the sense that everyone should do their part, carry their weight.

Maybe that is why when we hear of a child donating $.06 to the cause, we question our own contribution. It is not a question of “am I doing enough?” it is more like, “Am I doing ALL I CAN DO?”

Play4Kay events are about each of us doing all we can do, each of us coming together for a cause much greater, much larger than our own efforts could conquer.

As Coach Yow would have wanted, Play4Kay is now uniting beyond the boundaries of courts or fields, it is uniting a nation and calling on each coach, player, and fan to do their part to end cancer–the greatest win of all.

If Coach Yow were here, she would likely issue a challenge. She might say, “When life kicks you, let it kick you forward” or “Never let the urgent get in the way of the important.”  One thing we know for sure, she would thank each person for their efforts, but she would also encourage us that we can do more. We must do more. Together, we will do more.

Together we will continue this fight, united in the battle against cancer.