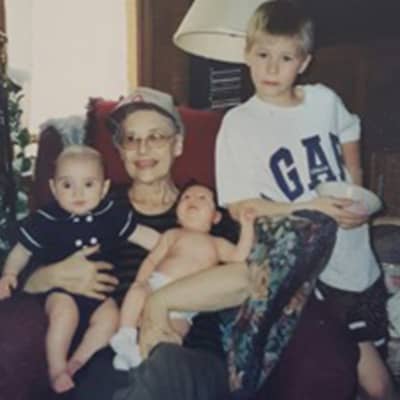 Jimmy V said, “Don’t give up.  Don’t ever give up.”  Kay Yow said, “When life kicks you, let it kick you forward.”  Shelby Harris said, “Put your red lipstick on and smile.” This is Shelby’s story.

Her journey was quite different, but she handled it with grace.  An inspiration to many, Mom was always a happy, positive person.  None of us ever doubted how much we were loved.

After Shelby graduated from Ruston High School she attended Louisiana Tech University where she met the love of her life, Joe Harris.  Their relationship began as a blind date and lasted for nearly 60 years. Mom and Dad were married on her 20thbirthday, August 16, 1958.  Together they raised three girls and were blessed with five grandchildren.

Mom was a seamstress.  As a stay at home mom, she earned money by sewing for other people.  She made our clothes, wedding gowns, bridesmaids’ dresses and cheerleading uniforms. She also smocked and made baby clothes. She could embroidery, needlepoint, and crochet.  And cook…oh how she could cook!

Shelby adored her family and loved her friends.  She was the strongest person I’ve ever known…mentally, physically, and spiritually.  Proverbs 31 describes our Mother best.  Her character was noble; our dad could depend on her, she brought him good not harm all the days of her life, worked eagerly with her hands, she provided for her family day and night; she worked vigorously with strong arms and was always helping those in need.  She tended the house and saw to it that all needs were met, and those needs always came before her own.  She was a woman who feared the Lord.   Being a homemaker while we were growing up, we never saw her idle.   All three of us were very busy with extra-curricular activities.  When we would come in from school, supper would be cooking on the stove, some sort of homemade sweets would be waiting for us, our clothes would be washed, folded and in our rooms.  All we had to do was make sure our homework was done for the next day, and many times, she would help with that.  Mom made each of us feel as if we were the most important person in her life. She would tuck us in at night and wake us up each morning, usually with the perfect cup of hot chocolate by our bed.

We never remember Mom being under the weather or complaining about being tired or needing a break.  Being our mother was what she did, and she loved every minute of it.

Mom was the definition of a true lady, yet the most ferocious solider on the battlefield on the war of her disease.  When she was first diagnosed with cancer, she never missed a beat.  We never felt as though she stopped taking care of us.  Mom never complained about having cancer.  Not once did we hear her ask, “Why me?”  She never said she was sick; she had a disease, but she wasn’t sick. Even on her worst days she put on her red lipstick, and she smiled. Her smile could brighten up a room, and she always smiled.

In February 1986, the dark day came when we got the news.  Surrounded by her husband and three girls, ages 21, 17, and 12, cancer made its first appearance into our family.  Everything happened so fast.  She went to the doctor one day, and the next day she began the first phase of what was to be a lifelong journey.  While our whole family was in shock and heartbroken, our mother, who was fighting a horrific battle, was our strength.

The next six months were filled with a mastectomy, chemo, two hour round trips for doctor visits, nausea, fatigue, and hair loss; and yet she never lost faith in Jesus Christ.  Her role as wife, mother, friend, seamstress, daughter, and sister continued on, but was now accompanied with the role of a cancer patient.  Still, she never complained.  She was always thankful to God for getting her through each day.

During this time, she made a wedding dress and six bridesmaids’ dresses. She considered that her therapy.  The bridesmaids’ dresses were made from measurements only; she never saw a bridesmaid, and theyfit perfectly.  Mom also attended the wedding.  She continued with her daily activities as if nothing had happened, taking care of her family.

Finally, the chemo was over and the cancer was gone…for now.

For the next sixteen years, life went back to normal for our family, no doctor visits, no chemotherapy.  She was even given the label of “Cancer Free.”

From 1986 until 2002, our family’s life returned to normal.  Mom saw her two youngest daughters graduate from high school and college, planned two weddings, and became a grandmother.

Christmas 2001, I knew something was wrong. Mom just wasn’t Mom. In the back of my mind I knew the cancer had returned. Her stamina wasn’t what it had always been; she would become short-winded easily and started asking for help doing things.

In February 2002, my parents had spent the weekend visiting their second grandchild.  As they entered Jodie’s house, Mom’s breathing could be heard from the other room.  She was so weak that weekend she had to have help with even the smallest of tasks.  As Mom and Dad prepared to leave, Dad had to carry her to the car because she didn’t have the strength to walk.

Dad drove the four hour drive from El Dorado, Ar. to Leesville, La. taking Mom straight to the ER. The cancer was back and things didn’t look good. It came back on the scar from her mastectomy. Mom had a large tumor that started on the scar itself, went through her chest cavity, and punctured her left lung.

Mom spent about two weeks in the hospital in Leesville.  They sent her home because there was nothing more they could do for her.  The next task was to find an oncologist that could see her immediately.  Dad sat down at the dining room table with the list of oncologists in their insurance group and began at the top of the alphabet.  First phone call went something like this, “6 to 8 weeks is our first available appointment.”  All the way down the list, Dad persevered through each phone call with the results being the same, “6 to 8 weeks”.  Knowing the gravity of Mom’s condition, he kept trying.  When he reached Dr. Ben Quinney’s name, which was at the bottom of the list, he got the same response, “6 to 8 weeks.”  Dad’s reply was, “We don’t have that kind of time, and I have run out of doctors’ names on my list of covered physicians.”  The receptionist asked Dad to send a copy of the pathology reports to them.  The Leesville hospital faxed those records immediately to Dr. Quinney’s office, and within 30 minutes we had an appointment with him.

With her first visit scheduled, Dr. Quinney went to work studying and researching Mom’s diagnosis, prognosis, and cancer history.   When the day for her first appointment came, Mom, Dad and Jodie sat in Dr. Quinney’s office waiting for him to make a treatment plan.  When he walked into his office, before he could say anything, Mom said, “I don’t want to hear any statistics.  I just need you to make me well because I have 2 grandchildren and one on the way that I intend to see grow up.” Dr. Quinney’s response was “yes ma’am, let’s get this show rolling.” Mom didn’t have one doctor, she had a team of doctors and with Dr. Quinney in the lead, they went to work.

My sister gave birth to my parent’s third grandchild and first granddaughter on the same day we put Mom in the hospital. Mom was there for her namesake to make her appearance before being admitted herself.  We were lucky it was the same hospital. Grandmomma didn’t miss a visit.  The nurses would bring Shelby Kate down to mom’s room so she could hold her.  It is amazing to see how God’s hand was in every bit of this journey, from not being able to find a doctor that could see her, to finding one that was in the same hospital that her third grandchild would be born in, to her first appointment with him being on the same day that grandchild would be born, to a team of doctors and nurses that fell in love with our mother.

Mom had a hole in her chest. The chemo went to work on the tumor and as it shrunk the hole got larger, her lung was deflated, and she was on oxygen. But Mom got better. She regained her strength and even went back to work.

In April of 2003, Mom got sick again. The hole in her chest wouldn’t heal, her lung wouldn’t inflate, and once again the fight was on. The doctors did a muscle flap to close the hole and the cancer ate 65% of it. Now there was a huge hole in her chest. After two surgeries and five and a half weeks in the hospital Mom came home.

It was during this hospital stay that Heather announced Mom’s fourth grandchild was on the way. Once again Mom told us to put the tears away, she wasn’t done yet. She had another grandchild to meet, love, and watch grow up. In December of that year Molly Blaire made her appearance.

Mom had a hole in her chest that was so deep I saw her heart and watched it beat. Once again, Mom came home. Home health nurses came to the house two times a day seven days a week to change the bandage. They became like family. Through all of this Mom was still taking chemo and smiling.

Mom went back to work, played with her grandkids, smocked, and made baby clothes. And took chemo. And smiled. Cancer was the hand she was dealt, and she played that hand with grace, never complaining.

Over the next fourteen years, five hour round trips for doctor visits, chemo, hair loss, hospital stays, blood transfusions, surgeries and words we didn’t want to hear became the normal. Through it all Mom was our rock-she put on her red lipstick and she smiled.